Perfect for a weekend trip

Nestled along the banks of the River Danube, just an hour away from Vienna, is Bratislava. Given its close proximity to Austria, many cross the border into the Slovak capital, only to leave at the end of the day. A flight from Edinburgh soon had me in the capital, albeit at 12.30 am. An early flight out three days later, meant I had two full days to explore Bratislava. I downloaded the Hopintaxi app and was soon on the way to my airbnb in Petržalky. Having no prior knowledge of the Slovak capital, I was looking forward to getting some sleep before hitting the town, to see what it had to offer. 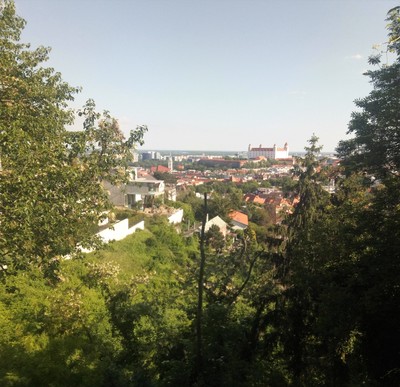 Petržalky is the largest borough of Bratislava. Situated on the right bank of the Danube, the area shares a land border with Austria, and is home to around 120,000 people. Socialist planners applied prefabrication, a concept brought to life in Western Europe at the end of the First World War. It was considerd to be the solution for mass housing during a period of rapid urbanisation that came hand in hand with massive industrialisation. Hence, Petrzalky is the most densley populated area in Central Europe. The next morning I meandered my way through the maze of high rise apartments to find the city centre. 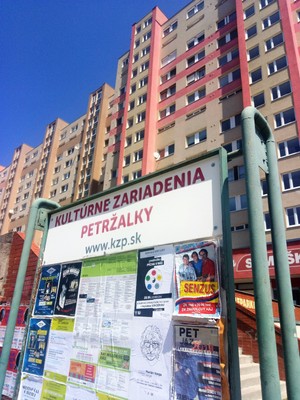 I soon met Lucy, and joined her on the short bus trip into town. She was so excited I was from Glasgow as she was a BIG fan of the cities Rangers football club and her dream was to watch them play. On enquiring how a girl from Petržalky followed Rangers, she informed her English teacher was a big fan! She was a medical student who also worked in a restaurant, where we went for a coffee.

Wandering deeper into the Old Town, it was difficult not to notice the groups of men In their blue and white sports shirts, emblazoned with 'Suomi'. These Finns were still half cut from the night before and were topping up with more beer, in the sun. It transpired it was getting near to the finals of the World Ice Hockey Championships, being held in Bratislava, and Finland were the favorites; they went on to win. Being one of the smaller capital cities, the historic medieval centre is easy to navigate and whatever route you take you, ultimatley leads to the main square. 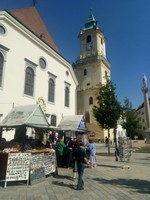 When I arrived at the square, I noticed a young guy holding a yellow banner, 'Free Walking Tour'. These tours are ubiquitous in many European capitals. However, they feature more predominantly, towards the Eastern side of the continent. Being free of charge, it is hoped you tip the guide at the end. Whereas paying a joining fee would be taxed, tips aren't considered, taxable income. He explained there were two tours, one being the old town/castle, although I was more interested in the 20th Century tour. Five of us were led off by Vojtech, to the only remaining synagogue in Bratislava. Here we heard of the thriving Jewish community prior to WW2 and how the fascist government of the day 'sold' the Jews to the Nazi's; who were carted off to Concentration Camps, most never to return.

Bratislava hosts a range of interesting statues celebrating famous lives and historical events. Although I must admit I often missed the intricate details due to switching off from Vojtech's loud, rapid fire descriptions. We did visit the one and only, quite unremarkable, monument in memory of Bratislava's Jews, complete with a dying wreath from the Isreali embassy. 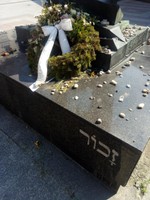 The highlight of the tour was a visit to the Slavin cemetary, situated on a hill above the castle, which we reached by bus. Slavin is a memorial monument and military cemetery of almost 7,000 Soviet soldiers who fell during World War II while liberating the city in April 1945. 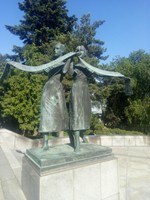 As we headed back into the centre, I was itching for the three hour tour to end, I found the listening, very draining. As we were led to the final stop, the Blue Church, I noticed a little shrine on the pavement. Vojtech advised it had recently been the first anniversary of the death of murdered journalist Jan Kuciak and his fiancee, shot in a targeted killing in 2018. 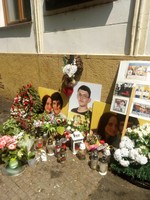 After giving Vojtech a tip, I set off to find somewhere I could try traditional Slovak food. The cobbled streets were heavy with tourists with many restuarants set up to entice folk in, with pictures of their traditional fare. 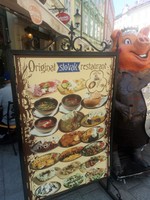 My first meal was rather disappointing. It was described on the menu as trout in butter and parsley sauce, baked potatoes and mixed vegtables. Quite a strange combination in itself! What arrived was a dry trout, complete with head and tail, lettuce and a few 'well done' potato wedges scattered round the plate. I really should have gone back to Lucy's restaurant! However, I stumbled across a baked potato joint 'Krumpla' the following day and had the best chilli and cheese potato I've tasted. Maybe not traditional Slovak fare, but tasty all the same. 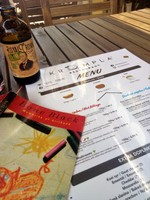 The sun continued to shine well into early evening and I decided to join everyone else and have an ice-cream. It was difficult trying to decide between cherry yoghurt, tiramasu, strawberry, chocolate mint..... I plumped for a coffee and raisin. On having a seat, I was soon joined by an older lady with a huge tag around her neck 'Gate A'. Sheila was from the States and was a spritly 80 year old. She was on a 6 month cruise with her husband and they were visiting 62 countries. SInce Slovakia is landlocked, Sheila and her fellow cruisers had docked in Amsterdam and were flown down to Bratislava. I was dying to ask how much a 6 month cruise on a 5 star ship cost, but decided against it! 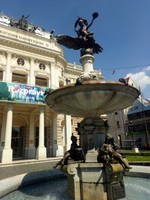 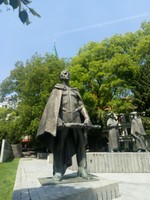 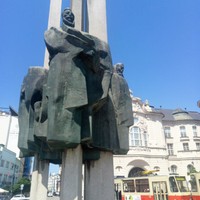 Chatting with Sheila, opened my eyes to the abundance of other tourists with the 'Gate A' tag dangling from their necks. In particular, there was a plethora of Chinese tourists, who seemed to be in competition, with their various arrays of head gear. The favorites tended to be the Easter bonnet variety for the ladies and jungle hats for men. The Chinese are the most maligned tourists mainly due to their tendancy to stick to large tour groups with their fellow country folk. They are easily identified being led around cities by their Chinese guide holding an umbrella, so they can be easily seen. The Chinese are also frowned upon for taking photos of themselves and parading around with their extended selfie sticks. To be fair, this mass increase in Chinese tourism, made possible by the rising middle classes and easier visa procedures, boosts the incomes of the countries on whose lands they tred. Whilst they are said to skimp on accommodation and food, they are reknowned for splashing the cash shopping, going home to show off their designer clothes purchased abroad. However, breaking with stereotypes, I met a Chinese woman, on the 20th Century tour, who was travelling independently and resisting the beaten track.

I didn’t spend my time in Bratislava doing anything particularly exciting. I spent it meeting some really nice people and walking around a fairy tale city. I was able to recharge my batteries and cure my travel blues, well for the time being! It's a very accessible city and public transport is cheap and efficient. It's extremely affordable and would cater to a range of budgets from the backpacker, to the high end hotel dweller. Lunches and dinners out, ranged from between 10 to 15 euros, although there are fast food restaurants and bakeries where you can find some cheaper eats. As I headed home at the end of the second day, the last sounds I heard, were Vojtech's dulcet tones, leading his night tour back to the square......

Posted by katieshevlin62 02:08 Archived in Slovakia

I've been here but just for the day from Vienna. If I go back I'll take a look at the cemetery. It looks interesting. We ate cheese and cold meat platters with dark bread for our meal here I remember and of course sampled the beer.

Yes Irene I would defo check out the cemetery if you find yourself back there. Thanks for the comment.

So, that's Bratislava, rich old lady and the Chinese hat parade as promised. Thanks for taking us there. It sounds interesting (but maybe a notch down from beautiful Budapest a little farther along the Danube),

I know you love Budapest Mike! As you know I like to talk about my observations and folk I meet on my travels, not so much they main tourist traps. Another blog may tell you about all about all the museums, churches and castles to visit! But if you liked Budapest you may find Bratislava a bit small and souless.

I can imagine vividly my country-men in their hockey frenzy!

Ha ha yes Henna, they love their hockey AND beer!

I visited Bratislava while I was staying in Vienna and really found it quite interesting. I enjoyed seeing your photos and reading your impressions of a city that I also liked.

This blog requires you to be a logged in member of Travellerspoint to place comments.

If you aren't a member of Travellerspoint yet, you can join for free.